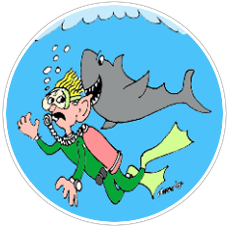 Despite his love for water, man is a creature made to live on land. Our ear is a hypersensitive organ, capable of handling minute air pressure differences, and reacts to them with movements of the eardrum/ossicles system, which can be as small as half the diameter of a hydrogen molecule. The high pressure differences occurring underwater are a huge strain for the human ear, and therefore mistakes or faults are not forgiven. If the diving rules are not followed strictly or there is even a small dysfunction in the ear, consequences can be really severe.

It is a tube connecting the middle ear cavity with the post-nasal space. When it is obstructed, negative pressure develops in the middle ear space, and damage to any part of the ear can occur, when equalization is attempted, during diving. Therefore, normal function of the Eustachian tube is very important in diving.

Eustachian tube must open several times during the driver’s descend, either passively or actively, to equalize pressures on both sides of the tympanic membrane. If, for any reason, it is blocked and unable to open, various types of damage due to pressure gradient may happen, included in the general term “barotrauma”.

Middle Ear Barotrauma is the most common diving problem, presenting with ear pain, hearing loss and tinnitus (buzzing in the ear). The symptoms appear during or immediately after the dive, and typically a difficulty in equalization during descent is reported by the diver. Middle ear barotraumas are treated medically and the diver is advised to refrain from diving, until easy equalization with unforced Valsalva is possible.

If pressure gradient is higher than the elastic tolerance of the eardrum, a tympanic membrane rupture may happen. This causes vertigo, due to entry of cold water into the middle ear cavity, and although it usually subsides in a few seconds or minutes, it can be dangerous for the diver. Most tympanic membrane perforations heal by themselves in a few days. If they persist, they can be corrected with a tympanoplasty.

Inner Ear Barotrauma is caused by a forceful attempt for equalization, in cases where the Eustachian tube is obstructed. The high pressure gradient induces damage to the hearing cells and the organ of balance, resulting in sensori-neural hearing loss and vertigo. The pressure difference can also cause a Perilabyrinthine Fistula, which happens in case of rupture of the membranes sealing the oval and round windows of the inner ear. Some cases of Perilabyrinthine Fistula need surgical treatment.

It is the most common ear problem during the summer. External Otitis is an infection of the skin of the ear canal, usually attributed to wetting by sea or swimming pool water. It can be caused by bacteria or fungi. Symptoms include hearing loss, due to occlusion of the ear canal by debris, pain, and itching, more prominent in fungal inflammation. In most cases treatment is topical, with ear drops and regular debridement by the doctor. Pain-killers will be needed in some cases. Very important for the quick recovery is to keep the ear dry, preferably with a piece of cotton wool soaked in Vaseline.

It is the feeling of rotation and disorientation caused by stimulation or defect in the organ of equilibrium, which is hosted inside the inner ear. Vertigo during a dive is considered a serious problem, as it can even put the diver’s life in danger, due to loss of orientation and panic.

Some of the conditions that can cause vertigo in diving are:

Active equalization of pressures in diving can be achieved by different techniques:

The Valsalva maneuver is the most well known but is potentially dangerous: If the Eustachian tube is completely occluded, a forceful Valsalva may vigorously increase the pressure inside the inner ear, causing inner ear barotrauma.

Before you start your diving lessons

Most diving schools ask for a medical certificate before the first dive. Take this medical check-up seriously, with emphasis in the thorough examination of the ears by a ENT specialist. Do not hide anything from your medical history during the consultation, either because you think it is not important, or on purpose, in order not to be excluded from the diving lessons. Very few conditions do not allow diving, but if you have one of those and you dive, the consequences can be catastrophic.

Diving will give you many happy moments, provided that you take it with due respect. Do not allow your underwater pleasure to be disturbed by unnecessary suffering and potentially severe medical problems.

Wherever you are you can now book your Online Appointment via Skype.